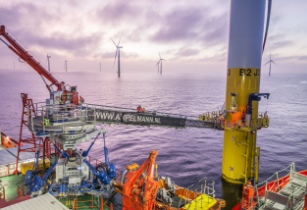 The global provider in offshore access solutions Ampelmann will celebrate its 10 year anniversary on 6 September 2017, at SPE Offshore Europe in Aberdeen, which will be held from 5-8 September 2017

During the event, the company will reflect on its journey from a team of four people in 2007 to a present day 350 stuff member organisation that services customers across the globe from offices in eight different countries.

The company has a track record of transferring more than 3.6mn people and 2.6mn kg of cargo which is transferred from ships to offshore structures in 200 individual projects.

Ampelmann currently maintains a fleet of 60 operational systems which are used for transferring crews and cargo to offshore structures. These solutions are tailored to the needs of different market segments, sea states, cargo and crew loads and are used by the key international players.

Jan van der Tempel, the founder and CEO of Ampelmann, “In the current offshore climate, being able to transfer staff members to offshore structures safely, affordably and efficiently is more important than ever. We help our customers limit downtime and reduce their project costs.”

“Our unique plug and play system enables our gangways to be mobilised in less than eight hours. This helps our customers tremendously,” he added.

To celebrate its 10-year anniversary, Ampelmann has published a whitepaper with a brief company history and other details. It contains information about existing and new developments in crew and cargo transfer solutions such as the A400, the L-type, the N-Type system created for Arctic operations and the A-type enhanced performance (AEP). This whitepaper also informs about the Ampelmann S-type which is being designed for use on medium and lightweight crew vessels with hull lengths of 50 m and larger.

Commenting on the 10-years celebration, van der Tempel said, “It is a thrilling and humbling experience to celebrate 10 successful years with our customers and stakeholders at various events this year, including SPE Offshore Europe 2017.”

“We very much look forward to engaging with various stakeholders at SPE Offshore Europe 2017 and jointly head towards the next decade and beyond,” he added.