Azerbaijani firm to invest in Libyan oil and gas sector 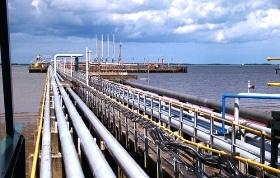 The cooperation between Azerbaijan and Libya in the field of oil and gas will hopefully boost development of both countries. (Image source: D H Wright/Flickr)

The Libyan National Oil Company said the issue was discussed at a meeting of Libyan oil and gas minister Abdel Bari Ali Al-Arousi and AzMeCo chairman of the board of directors Nizami Piriyev.

During the meeting, Piriyev voiced his company’s interest in the oil and gas sector of Libya, in particular in the development of various projects jointly with the Libyan companies.

In turn, the Libyan minister welcomed the interest of AzMeCo to work in the petrochemical sector of the country and urged Azerbaijani companies to participate in the tenders in various sectors of economy of Libya, in particular in the oil industry.

In March 2013, Azerbaijani ambassador to Libya Aghaselim Shukurov said Azerbaijan was interested in the Libyan oil and gas sector and voiced the Azerbaijani companies’ intention to participate in drilling operations in hydrocarbon fields of Libya.

Libya had welcomed this intention noting that the cooperation between Azerbaijan and Libya in the field of oil and gas will boost development of both countries’ economies.