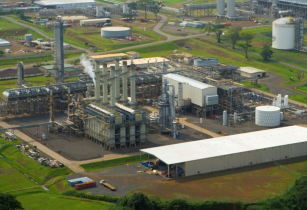 The methanol plant is a component of the larger Punta Europa gas processing facility owned by Marathon Oil and its partners. (Image source: African Energy Chamber)

“The Punta Europa complex is the crown jewel in Equatorial Guinea’s gas processing infrastructure and is central to our long-term plans for gas monetization. However, due to a lack of investment in the Alba field and the methanol plant, a modular refinery would be a more productive project for that space,” said Gabriel Mbaga Obiang Lima, minister of mines and hydrocarbons.

As part of the country’s new Gas Mega Hub project — which aims to provide additional gas supply to processing facilities, both onshore and offshore — new investment in the Punta Europa complex is needed.

The plant is currently supplied by Marathon Oil’s Alba field, which has seen declining production. The first phase of the gas mega-hub project is to implement a new gas supply agreement signed between the MMH and Noble Energy, operator of the Aseng and Alen fields in Block I/O. Gas will be supplied to the Punta Europa gas complex, which includes the Malabo power station, AMPCO methanol plant and the Equatorial Guinea LNG plant. The agreement, combined with new subsea pipelines linking the Aseng, Alen and Alba fields, will replace some of the gas production lost as the Alba field declines.

Noble Energy made a discovery in the offshore Block I in August 2019, when the Aseng 6P well was drilled to a total depth of 4,417 meters. Kosmos Energy and Trident Energy struck oil in November, making a discovery when the S-5 well was drilled at a total depth of 4,400 meters and encountered 39 meters of net oil play in the Santonian reservoir, in the offshore Rio Muni Basin. The discovery was the first well drilled in Kosmos’ infrastructure-led exploration (ILX) in offshore Equatorial Guinea. The drilling of the S-5 well was accelerated following exciting 3D seismic acquired in 2018.

An expected direct investment of a minimum of US$1.4bn — a firm US$1.2bn and a contingent forecast of US$273mn predicted for 2020 — is associated with the drilling of two wells and the continuous development of six existing wells in Equatorial Guinea in 2020.