Chief Timipre Sylva, Nigeria’s Minister of State for Petroleum Resources, has pledged support of the Federal Government towards ensuring the completion of the 650,000 bpd Dangote Petroleum Refinery during an official visit to the Petrochemical complex, located at the Lekki Free Trade Zone in Lagos, Nigeria 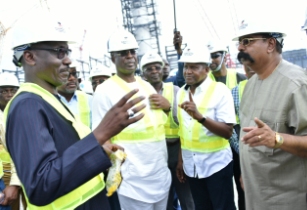 The Dangote refinery, which is designed to maximise petrol output, will produce enough to allow for a small surplus of that fuel for export. (Image source: Dangote Group)

The minister was led on a tour of the refinery by the group president/CEO, Aliko Dangote, and the company’s executive director, Strategy, Capital Projects and Portfolio Development, Devakumar Edwin.

Sylva said the Dangote Refinery and Petrochemical was a testament that the country possesses enabling environment for businesses to thrive and added that the success of the project will boost investors confidence in the country’s oil and gas project. He implored Nigerians to support the refinery project with a view to ensuring that it creates more value addition to the economy.

Devakumar Edwin, the company’s group executive director, Strategy, Capital Projects and Portfolio Development, said that the asset creates a market for 11bn per annum of Nigerian crude and can meet 100 per cent of the Nigerian requirement of all liquid products.

He said that Nigeria is Africa’s largest crude oil producer, but lacks refining capacity to meet its own fuel needs.

“The Dangote refinery, which is designed to maximise petrol output, will produce enough to allow for a small surplus of that fuel for export. It will also be able to send a large volume of diesel and jet fuel to international markets,” Edwin added.

Dangote plans to export its diesel to Europe and gasoline to Latin America, Western and Central African markets, he noted.

“We are thinking of investing in vessels. We want to make sure we are not held for ransom by any transport operators. Africa’s largest oil refinery had revealed that it would deliver its fuels to Nigerian consumers via roads and sea ports, and will effectively replace all of Nigeria’s fuel imports once fully operational,” he concluded.