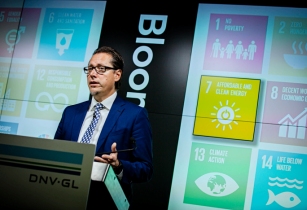 Energy efficiency will improve faster than global economic growth due to the rapid electrification of the world’s energy system, leading to a plateau in energy demand from 2030, according to DNV GL’s inaugural Energy Transition Outlook launched on 4 September 2017

The report has further revealed that renewable energy sources will continue to rise, making up nearly half of global energy supply by 2050. The global gas supply has been projected to reach its peak in 2035 and remain as the biggest single source of energy by mid-century.

The world will shift to renewable future without increasing overall annual energy expenditure, indicating that the future energy system will require a smaller share of GDP, as stated in the report.

“The world is approaching a watershed moment as energy demand is set to plateau from 2030, driven by greater efficiency with the wider application of electricity. A rapid decarbonisation of the energy supply is underway with renewable set to make up almost half of the energy mix by 2050, although gas will become the biggest single source of energy,” said the company in a statement.

The company has explained that energy demand and CO2 emissions have moved broadly in line with GDP and population growth. Electrification, particularly with the uptake of renewable sources, is expected to change the way in which energy is supplied and consumed throughout the world.

DNV GL has forecasted that renewable energy and fossil fuels will have an almost equal share of the energy mix by 2050. Wind power and solar photovoltaic (PV) will drive the continued expansion of renewable energy, whilst gas is projected to surpass oil in 2034, as the single biggest energy source.

The company has also said that oil will flatten from 2020 to 2028, and demand will fall significantly from that point as the penetration of electric vehicles gains momentum.

The world’s energy has been projected to cost less than three per cent of global GDP as compared to the current level of five per cent. Solar PV and wind costs are set to decrease by 18 per cent and 16 per cent respectively.

“Although the oil and gas industry has responded impressively to the present lower price environment, renewable will improve cost performance at a much faster rate, benefitting from the ‘learning curve’ effect. Electric vehicles will achieve cost parity with internal combustion vehicles in 2022 and, by 2033, half of new light vehicle sales globally will be electric,” said the company.