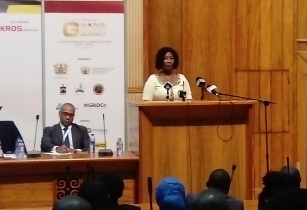 Leaders from the oil and gas industry representing Ghana and Equatorial Guinea were largely upbeat when they addressed delegates at the opening ceremony of the Ghana Summit, which is being held this week in Accra

The theme of the conference is "Ensuring sustainability in the oil and gas sector to drive economic development".

Representing President Nana Akufo-Addo, Boake Agyarko, Minister of Energy, started his address by saying the office of the president and the ministry would work very closely with the Petroleum Commission to ensure that the passion for oil and gas development in Ghana is transformed into positive benefits for the people of the West African country, in particular in terms of the most efficient allocation of resources.

Mr Agyarko outlined three strategies for developing the oil and gas industry in a sustainable way. These were "to move from a tax-driven economy to a production-driven economy"; "formalisation of our national economy to reach the huge informal sectors"; and "to remove the obstacles that impede the efficient functioning of the market".

He said that the drop in oil prices was a "clear indication for the ardent need for all of us to change the way we do business [as] the ethos of 'business as usual' is over."

Ensuring local content requirements are met was described as an "opportunity"  and a "deliberate business strategy" by Mr Agyarko.

"The vision is to develop a model of a diversified, efficient, financially stable energy economy to meet the needs of the country," he told the conference. Mr Agyarko reiterated the importance of transparency and accountability in the industry, referring to legislation and regulations that have been put in place to this end.

Natural gas is envisaged to play a leading role in energy generation for Ghana as well as being a major export, according to Mr Agyarko. He said that focusing on meeting local energy needs should boost other industries, such as infrastructure development and agriculture.

"We must not become another enclave of resource exploitation dominated by foreign interests," Mr Agyarko warned delegates. "The theory of future preference is that the future can and will be better than the present and we have a responsibility for making it so."

Representing Dr KK Sarpong, CEO of the Ghana National Petroleum Corporation (GNPC), Comfort Aniagyei, the director of finance for GNPC, echoed Mr Agyarko's sentiments that the Ghanaian oil and gas industry must help the whole population in the long term: "The oil and gas sector must evolve so that it benefits not just the current generation but the generations yet unborn."

Mrs Aniagyei described GNPC as "an enabler, contributing to sustainable development". She said John D. Rockefeller's famous quote about succeeded by getting up early, working hard and striking oil reflected the Ghanaian experience, with oil exploration first taking place in 1896, as well as a period of offshore exploration from 1970 until 1984, before the establishment of GNPC in 1985. Work which was done before the big Jubilee discovery of 2007 left Ghana with a "treasure trove of seismic data", she told the conference.

As well as the successes of the Jubilee, Sankofa and TEN fields, Mrs Aniagyei said that OTCP will commence production next year. She was also upbeat about the prospects for the Voltain Basin.

"Voltain will happen and it will happen big," she said. "Expect these [discoveries] to add to our current reserves."

Mrs Aniagyei told delegates that GNPC has big plans in terms of corporate social responsibility, including meeting environmental responsibility goals and focusing on encouraging people to study the science, technology, engineering and mathematics disciplines. She added that "economic empowerment" of communities affected by oil and gas activites was a priority, saying GNPC had to become "more responsive to the needs of the people."

She concluded her keynote address by saying that "the road ahead is difficult but surmountable".

Theo Ahwireng, CEO of the Petroleum Commission, Ghana's regulatory body for upstream oil and gas, said that infrastructure was important for the ongoing success of the country's hydrocarbon industries: "[Infrastructure] is not my jurisdiction but if we are able to find oil and gas [we can] monetise one development after another."

"Gas will be piped along the western corridor [to] bring gas and restore power [and it is] fantastic to be able to do this without flaring," Mr Ahwireng said.

He told the conference that meeting local content requirements had been done "pretty well" with 90 per cent of people working in the country's oil and gas industry being Ghanaian. To further this success, Mr Ahwireng said it was important to provide more placements for graduates in the oil and gas industry, as well as technical and vocational apprenticeship programmes. He added that a study was being undertaken to determine how many technicians will be required in Ghana to meet the needs of the industry, ensure proper training is delivered and that people are deployed properly.

Attracting investment is another priority, according to Mr Ahwireng. He is confident of this as long as the richness of Ghana's hydrocarbons deposits are properly promoted. He said that when he first started working in the oil and gas industry, there was a 10 per cent success rate with wells drilled but in many Ghanaian projects, this is now at 100 per cent.

Working to ensure the oil and gas industry does not negatively impact on other industries, such as fishing is important, Mr Ahwireng said. He cited the Norwegian model in which hydrocarbons projects and fisheries successfully co-exist while both being profitable.

Representing Equatorial Guinea, the country's minister of mines, industry and energy, Gabriel Mbaga Obiang Lima, gave a lively presentation to delegates. He said that if Africa was just four countries, divided up by north, south, east and west, they would be the biggest oil nations in the world, adding that it is important for more African countries to join OPEC and to cooperate with each other. Equatorial Guinea has become OPEC's fourteenth member.

"If we work together, we will have a bigger impact that Saudi Arabia and Russia together," Mr Obiang Lima said.

Without mentioning the name of the new US president, he used examples of Donald Trump's campaigning and rhetoric to make analogies about Equatorial Guinea's oil industry. He said that Mr Trump's campaign focused on his base and he "didn't care about anything else". In the case of Equatorial Guinea, the same sort of focus is needed to ensure oil is developed with the country's best interests foremost.

"We need to fight tooth and nail for our resources," Mr Obiang Lima said. "It is an issue of life and death - if we sit and watch how the oil price is changing, development in our country [will stall] ... [we cannot] sit and wait for the oil price to go up."

Referring to Mr Trump's much-repeated accusations of fake news, Mr Obiang Lima said the same can be said of oil price speculation, especially since it has dropped. He said that the low oil price has been been blamed for issues that are unrelated to it. He said this has led to another Trump analogy - "never recognise that you don't know anything."

"If I'm honest ... I don't know what will happen to the oil price," he said. He is sceptical of expert predictions on the future of the oil price because "we don't really know."

In terms of gas development, Mr Obiang Lima said that the future of gas transportation is LNG and, in particular, floating projects. With FLNG, he said that Equatorial Guinea is "a little country but, like Napoleon, we like to do big things."

Eyeing the success of Ghana as a model for Equatorial Guinea, Mr Obiang Lima said he was at the Ghana Summit to "pick the brains of Ghana".

"We need to be able to defend our base and our base is our resources," he said.