Gabon continues to plot the path to a brighter energy future 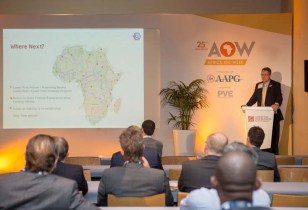 It reached its peak 12 years ago when oil production reached 370,000 bpd – its current production is 200,000 bpd. To combat the natural decline of mature fields, the government has focused its attention on offshore resources which account for more than 70 per cent of the reserves.

This has been an important and busy year for the nation. Its 12th Shallow and Deep Water Licensing Round that was launched at last year’s Africa Oil Week conference is still underway; Gabon has enacted its revised hydrocarbon code supported by the International Monetary Fund, which is fiscally more attractive than the previous one; and Petronas announced its signing for a further two exploration permits – the two offshore blocks, F12 and F13, are said to have a production capacity of 200,000 bpd.

“Let me first say that Gabon is one of the safest oil-producing countries in Africa and has been for a long time,” Pascal Houangni Ambouroue, the Gabonese Minister of Petroleum said at last year’s Africa Oil Week conference. “At the moment most of the oil wells that are producing are mature, which is why the Gabonese Government has put in place a set of measures such as the revisions to the Hydrocarbon Code to improve production from these mature wells and also encourage exploration and discovery of new oil in deepwater offshore.

“This will also stimulate the entry of new players with the major companies now focussed on deep waters for production of oil and gas. Ongoing prospecting shows that Gabon has very good resources in terms of oil and gas for the future. To combat the natural decline of mature fields, the government has focused its attention on offshore resources.”

There are currently 30 oilfields in production, making Gabon the fifth-largest oil producer in Africa, but production is declining. The Gabonese Government launched its tenth bidding round in late 2013 that generated eight new production sharing contracts with Marathon, Petronas, Repsol, Noble and Woodside, Impact Oil & Gas and Ophir which are all working on their exploration programmes.

A further round was launched just over two years ago but the government was forced to suspend it as the low oil price and proposed economic terms failed to attract the desired interest, hence the recent amendments to the code.

In the first half of this year, CGG completed its 9,800 km long-offset broadband 2D multi-client seismic survey in the Gabon South Basin. “The vast offshore acreage of Gabon includes unexplored areas with good potential for a hydrocarbon system,” Sophie Zurquiyah, CEO, CGG, said. “However, there is often not enough high-quality geological and geophysical data to effectively reduce the exploration risks. This new 2D survey, which received significant industry pre-funding, puts the right data in the hands of our clients at the right time, enabling them to de-risk opportunities and select the appropriate blocks during the current licensing round.

“Broad bandwidth data will not only increase resolution and improve characterisation of the turbidite systems that represent potential exploration targets, but it also provides deep imaging penetration with low frequencies to help describe the nature of the crust,” Zurquiyah added.

Zurquiyah was referring to the Boudji-1 and Ivela-1 discoveries made in 2018 by Petronas and Repsol, respectively.

One company active in Gabon is Vaalco Energy who are currently undertaking a drilling campaign at the Etame field offshore Gabon. Vaalco estimates that there could be up to 4.6 million gross barrels of recoverable oil present in the Dentale reservoirs beneath the Etame field. If these resources are present in the Dentale, the company will need to drill additional wells to exploit these reservoirs.

“We have entered into the first phase of our growth strategy starting with the Etame 9P appraisal wellbore where we are seeking to de-risk significant resources in the Dentale formation with a view to future exploitation opportunities,” Cary Bounds, the company’s chief executive officer, said. “The resources we are targeting were identified in oil-bearing Dentale reservoirs encountered in wells drilled beneath the Gamba reservoir at the Etame field. The Etame 9P appraisal wellbore represents the first of many opportunities where we are attempting to create substantial value for our shareholders by converting resources to reserves in a cost-effective manner.”

The announcement of the new hydrocarbon code has been critical, the Ministry and DGH have ensured that the conditions are right to attract investment into the country. In particular, reducing the corporation tax to zero, I believe, will ensure international interest from IOC and NOC.

AOW is one of the major destinations in the Gabon 12th Licencing Round Roadshow, where we have seen significant industry interest in offshore Gabon.