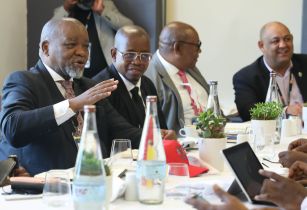 AEW 2022 will build on the deals signed, partnerships formed, and relationships cemented at the 2021 edition. (Image source: African Energy Chamber)

The African Energy Chamber (AEC) announced the dates for African Energy Week (AEW) 2022. Returning for the second edition of the continent’s premier energy event, AEW 2021, will officially take place from the 31 October - 4 November 2022 across multiple venues at the V&A Waterfront in Cape Town.

Under the theme ‘Developing Africa’s Energy Future by Creating an Enabling Environment,’ AEW 2022 will unite Africa’s energy ministers, global players, and both public and private sector executives for a week of networking and deal making in Cape Town. By promoting the significant regulatory achievements made in Africa thus far, emphasising the role that enabling environments will play in attracting investment, and making a strong case for ease of doing business in Africa’s energy sector, AEW 2022 will be the place for investors to be introduced to African opportunities, driving the continent’s energy transformation and associated socio-economic growth.

AEW 2022 will build on the deals signed, partnerships formed, and relationships cemented at the 2021 edition, following up on deals already initiated at AEW 2021 and further consolidating Africa’s position in global energy dialogue. In the face of the energy transition, global market fluctuations, and redirected capital channels, AEW 2022 is focused on positioning regulatory reforms at the center of Africa’s energy sector development. It will promote enabling environments as a catalyst for enhanced industry growth and success.

With various countries across Africa already pursuing the creation of an enabling environment through modernised, market-driven regulations, AEW 2022 is committed to ensuring the work made by industry leaders does not go unnoticed, but rather, attention is brought to lucrative investment destinations across the continent. With emerging opportunities coming online across the entire continent, Africa’s energy stakeholders are committed to driving the continent’s multi-sector energy growth. South Africa and Namibia, for instance, with the highest potential for hydrogen globally, are both on the verge of becoming hydrogen economies. Additionally, countries such as Senegal, Mozambique and Nigeria are aggressively pursuing natural gas expansion.