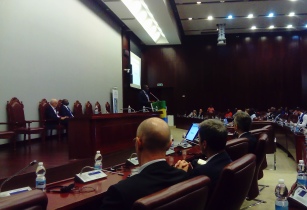 At APPO Cape VII in Malabo, DGH, Gabon's hydrocarbons ministry, reminded delegates of the terms of the 12th licensing round, which was launched last year, as well as giving an update on the country's petroleum code

The Gabonese government has reviewed the code and it is now before the country's parliament for ratification.

A spokesperson for DGH said it is hoped that the new code is "more objective to the oil and gas industry".

Bids for the 12th licensing round close on 30 September - there are 35 blocks on offer for exploration, 12 conventional offshore and 23 deepwater offshore blocks. There are 2D and 3D seismic data available from DGH for interested parties. Delegates were told by the spokesperson that Gabon has good existing infrastructure including export terminals, five FPSOs and one refinery for the local market.

The bidding process includes requirements for a technical offer and an economic and financial offer, with local content as a major priority.