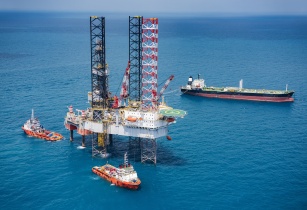 FAR Limited, an independent Africa-focussed oil and gas exploration and development company, has released updates on the Bambo-1 well, which has drilled 3216m MDBRT (measured depth below the rotary table) of a total planned depth of 3450m MDBRT

The company said that the oil indications have been detected in rock cuttings and hydrocarbons have been interpreted across several intervals in the well from LWD data (logging whilst drilling). Further wireline logging needs to be completed to confirm the finding.

FAR, further explained that the drilling operations were temporarily halted at the current depth after significant fluid losses were experienced. These fluid losses were stabilised in accordance with standard offshore operating procedures, and the company is now planning to plug and side-track the well to continue drilling to the planned total depth. Prior to side-tracking and provided hole conditions remain stable, FAR is undertaking a wireline logging program in the current well bore.

FAR estimates that the cost to complete the well will increase from a total of US$51.4mn to US$61.27mn, an increase of US$9.87mn or US$4.935mn net to FAR. The company forecasts a cash balance of US$37mn after the completion of the well, inclusive of the increase in Bambo-1 well costs. The addition of the side-track program has extended the period of operations which is now expected to be completed by the end of 2021.

FAR’s managing director, Cath Norman said, “FAR is pleased with the experienced drilling team and contractors who have acted to quickly manage and adjust the Bambo-1 drilling program to suit the geological setting and best meet the objectives of the drilling program. FAR is well placed to achieve these objectives through the side-tracked well and in particular drilling through the as yet undrilled Soloo Deep prospect. We are encouraged by the presence of oil in potential reservoirs and look forward to completing the well in the coming weeks.”