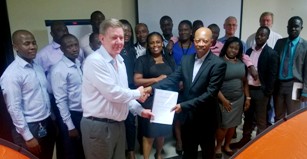 The contract will support 2D seismic exploration of the Voltaian Basin, which is located in Ghana's south-central region and covers an area of 104,000km2, or 40 per cent of the country's total land mass. Hydrocarbon exploration in this region is particularly challenging because of the basin's age, probable geological history and the presence of the Volta Lake, the largest man-made lake by surface area in the world. It is a sedimentary Neoproterozoic basin with similarities to areas in North Africa which are already producing hydrocarbons.

EPI SonarTusk, which is EPI Group's Ghanaian joint venture company, will provide project management consultancy services to support the exploration activities of GNPC. Under the terms of the contract, EPI SonarTusk will define the scope of work required with the assistance of project managers, geophysicists, surveyors, QC consultants and environmentalists. A tender process will then follow, involving the creation of tender documents and the evaluation of bids. EPI SonarTusk and GNPC will then work together to select and supervise the successful contractors. Processing and manipulating seismic data will also be part of EPI SonarTusk's remit.

Alexander Kofi-Mensah Mould, acting chief executive of GNPC, said: "We want to explore and better understand the basin and its potential for development before inviting partners to join us."

"A project of this size and complexity is a rare opportunity, and we are delighted tobe involved in such a technically challenging but rewarding project, supporting GNPC in its efforts to develop its extensive onshore resources," said Edward Bowen, CEO of EPI Group.