Eni, a on behalf of its Area 4 Partners (ExxonMobil, CNPC, GALP, KOGAS and ENH), has held the naming and sail away ceremony of the Coral-Sul FLNG, the first floating LNG facility ever to be deployed in the deep waters of the African continent 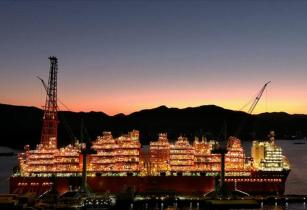 The Coral Sul FLNG is 432 metres long and 66 metres wide, weighs around 220,000 tons and has the capacity to accommodate up to 350 people in its eight-story Living Quarter module. (Image source: Eni)

Production startup is expected in the H2 2022, and it will contribute to increase gas availability in a tight market.

The Coral South project is set to generate significant government take for the country while creating more than 800 new jobs during the operation period.

Stefano Maione, director development, operations and energy efficiency at Eni, said, “The Coral Sul FLNG is a world-class feat of engineering, construction know-how and technology, suited to kick-off the development of Mozambique’s world-class resources. The project fits integrally with and within the Eni’s energy transition strategy, as we move towards a decarbonised energy future, in which gas is playing an essential and transitional role.”

Coral-Sul FLNG has implemented an energy optimisation approach, integrated in the design via a systematic analysis of energy efficiency improvements. These include among others, zero flaring during normal operations, use of thermal efficient aero-derivative gas turbines for refrigerant compressors and power generation, use of Dry Low NOx technology to reduce NOx emission and waste heat recovery systems for gas processing.