DNG Energy has announced to commence the delivery of liquefied natural gas (LNG) to commercial customers in the industrial, transport, marine and power sectors, with an aim to catalysing the growth of a new gas economy in South Africa 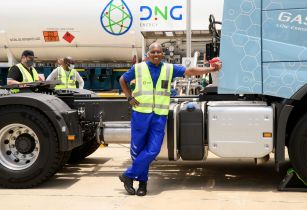 Aldworth Mbalati, founder and CEO, DNG Energy, said, “The launch of DNG Smart Gas, our commercial LNG operations, brings us significantly closer to our vision of achieving energy security and stability in South Africa. This has been a long and complex journey with numerous barriers to surmount – from securing financing to obtaining regulatory approvals.

Last year DNG received final authorisation from the Transnet National Ports Authority to begin the bunkering operations in the Port of Coega, in the Eastern Cape. The company has deployed a 125,000 cbm-capacity floating storage unit (FSU) to support LNG bunkering operations.

This advanced infrastructure will be used to offer ship-to-ship transfers for international trading ships as well as onshore LNG transfers via road and pipelines. DNG has developed a network of gas supply, enabling reliable LNG supply to penetrate the energy market nationwide. DNG has already conducted LNG proofs of concept with partners in the private and public transport industries, including Imperial, Masana BP and Rea Vaya.

Mbalati said, “We see the LNG value chain in a holistic way, from source to consumption, with robust expansion infrastructure plans for South Africa, Mozambique and Nigeria. Over the next few years, LNG has the potential to drive significant growth and job creation, while helping South Africa meet its targets in reducing greenhouse gas emissions by as much as 30% to 40%.”