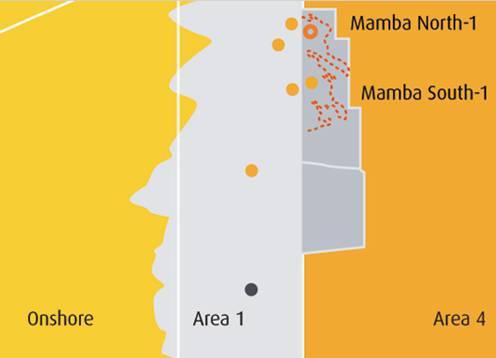 The well was drilled in the southern part of Area 4 and the results are of particular significance as they confirm a new exploration play that is independent of those drilled so far in previous Mamba wells. The Coral discovery is estimated to contain between seven and 10 trillion cubic feet (tcf) of gas in place, exclusively located in Area 4.

Coral 1 is located 65 km off the Capo Delgado coast in a water depth of 2,261 m and reaches a total depth of 4,869 m. The well was drilled approximately 26 km south east of the Mamba South 1 discovery.

The discovery well encountered a total of 75 m of gas pay in single high-quality Eocene sand. Eni will run a production test on the Coral 1 discovery.

The company plans to drill at least another five wells to fully establish the full potential of Area 4.

Eni is the operator of Area 4 with a 70 per cent participating interest. Co-owners in the area are Galp Energia (10 per cent), KOGAS (10 per cent) and ENH (10 per cent, carried through the exploration phase).