The President of Mozambique, Filipe Jacinto Nyusi, has visited and inaugurated the Coral-Sul FLNG installation, located in the ultra-deep waters of the Rovuma basin 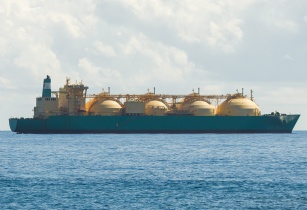 The President and the representatives of Eni also discussed the possibility of replicating the success of the Coral South project with further FLNG development. (Image Source: Adobe Stock)

The inauguration was attended by the Minister of Mineral Resources and Energy Carlos Zacarias and by representatives of Mozambique’s government. They were accompanied by an Eni delegation led by Guido Brusco, Chief Operating Officer Natural Resources.

The event took place after the shipment of the first LNG cargo on 13 November from Coral Sul FLNG (Floating Liquefied Natural Gas), the world’s first ultra-deep-water FLNG and the first LNG producer in Mozambique. Coral South, a landmark project for the gas industry, is projecting Mozambique onto the global LNG stage, paving the way to a transformational change of the country through development of gas resources, an important contribution to the security and diversification of supplies to Europe and one of the most effective solutions to ensure a just energy transition. It is the result of an outstanding collaboration among Eni, partners, and the people and government of Mozambique.

On the sidelines of the inauguration ceremony, Nyusi and Eni representatives also discussed the possibility of replicating the success of the Coral South project with further FLNG development, as well as other onshore projects. They also discussed the status of Eni’s initiatives towards carbon neutrality, including the agri-feedstock project under the agreement between Eni and the government of Mozambique.

Eni has been present in Mozambique since 2006. It is the delegated operator of the Coral South Project on behalf of the Area 4 Partners. The company discovered supergiant natural gas resources in Area 4, the Rovuma basin, namely the Coral, Mamba Complex and Agulha reservoirs, holding estimated 2,400 bn cu/m of gas in place.