Four of the best ‘brains’ in the industry challenged each other with a seemingly impossible task: to build an ultra-deepwater-equipped drillship with lower capital requirements, reduced operating costs, smaller crews, improved effeiciency, and impressive environmental credentials, while maintinaing most of the enhancements offered by larger designs. The result: the Noble Bully Drillship. 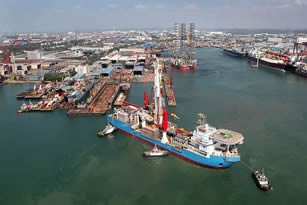 25 per cent shorter and 60 per cent lighter than comparable capacity drillships, the ‘Bully’ offers a solution to rising rig costs. But that’s not all. Léon van den Broek, Global Category Manager Drilling Rigs, explains some of its extraordinary features.

“In 2006, a design team consisting of leaders in their respective fields – in co-operation with Shell’s deepwater experts – started with the design work.”

“Starting life as a lengthy flipchart wish list, it son evolved into a feasible design – a good eight to ten metres narrower and 50-80m shorter than even the newest sixth-generation drillships. The drillship packs a punch with as much thrust capability and engine power as larger drillships. At the same time, its compact design means it can also operate I water depths as little as 16m, subjects to suitable ocean conditions.”

“An innovative, new compact box-type drilling tower, called the Multi Purpose Tower (MPT), was chosen over the lattice structure of conventional derricks. Its size allows it to be fitted on to a much smaller vessel. The MPT consists of one main hoist and one secondary hoist together on one tower.

The advantage of this is that the main hoist can perform the primary drilling functions while the secondary hoist is used for pipe handling and other offline activities.

“The vessel is designed to drill conventionally with a subsea Blow Out Preventer (BOP) and 21” marine riser system outfitted to operate in water depths of up to 2,514m and upgradeable to accommodate a surface BOP system in water depths up to 3,650m. The drillship has a rated drilling depth of 12 km, Located on tope of the poop deck is a riser storage rack capable of holding approximately 9 joints of marine riser, each 27 m in length, used to connect the subsea BOP to the wellhead for drilling and completion activities. The ship also has an enormous capacity to store approximately 245 km of drill pipe and various casing sizes in the cargo holds and on the main deck in front of the moon pool - the opening in the centre of the vessel, through which drilling operations are conduced.

“The drill floor is raised to accommodate both surface and subsea BOP operations, with inline tensioners capable of providing tensioning capabilities up to 3mm/lbs required for ultra-deepwater. The drilling equipment and a moon pool are situated just behind the midship section. Mud tanks, mud treatment equipment, nitrogen gas storage, offices and bulk storage silos are located around the moon pool.”

“The drillship hull is quipped with advanced dynamic positioning capabilities. This is a computer-controlled system which automatically maintains the vessel’s position. GPS, combined with wind sensors, motion sensors and gyro compasses, provide information to the computer about the vessel’s position, and the magnitude and direction of environmental forces affecting its position.

“The computer program contains a mathematical model of the vessel that includes information pertaining to the wind and current drag of the vessel and the location of the thrusters. This allows operations at sea where mooring or anchoring is not feasible due to deep water, congestion on the sea bottom (pipelines, templates) or other problems. Dynamic positions can lock the position to a fixed point on the ocean floor, or relative to a moving object like another ship or an underwater vehicle. One may also position the ship at a favourable angle towards wind, waves and currents, called weathervaning.

“Developing the dynamic positioning system involved extensive rounds of ice tests using different scenarios. The result, an automated thruster retrieval system, allows the thrusters to be retracted flush with the baseline of the vessel, for transit and for operations in ice. It also allows inspection and maintenance of the thruster motors to take place inside the hull. The system is also expected to reduce fuel consumption, greenhouse gas emissions, and wear and tear on propulsion and controls.

“In fact, the attention to energy efficiency across all onboard-installations means that overall fuel consumption, and therefore emissions are also significantly reduced, with the aim of meeting the FUS Environmental protection Agency’s Tier II air emissions standards.”

“Now known as the Noble Bully I and Noble Bully II and owned by a 50-50 joint venture between Shell and Noble, the drillships are currently being outfitted and completed at Keppel Shipyard in Singapore.”

“The drillship’s design effectively sets a new standard. While highly capable, but smaller than current new-build drilling rings of similar capability, its construction and operational costs are much lower. At the same time, the vessel offers more flexibility as it can be used for both deepwater and upgradeable to conduct Arctic drilling. Much of the work previously done manually has been replaced by new automated technology. This not only helps to lower costs, but will also increase safety on board. Our original flipchart wish list has truly become a reality in a very short space of time!”